FEAR: False Evidence Appearing Real: When Our Thoughts Scare Us

I took a deep dive into fear this month.  Over this past year, someone I lovedearly, a close family member, has been experiencing a physical symptom. We’ve been unable to get to the bottom of it; the doctors have not been particularly concerned and so we’ve resorted to just managing the symptom best we can. I haven’t been particularly worried, assuming it was just one of the umpteen physical symptoms that come for seemingly no reason and then go for seemingly no reason, without our ever really knowing why or what it was all about.

On a recent Friday afternoon, I was having a conversation with this person and she casually mentioned another symptom that she experiences. She had never brought this to my attention because she just assumed everybody felt the same thing.

In that moment, I was slightly alarmed by the symptom she mentioned as it was definitely not a sensation most people have and certainly not one that people get on a regular basis.  It was also, I knew, a symptom associated with some pretty terrible things.  I said nothing about my concern but calmly inquired more into her experience, When does she get this sensation and what if anything brings it on and other questions.  On the outside, I probably appeared quite nonchalant, but on the inside, a small tsunami was forming in my chest.

Immediately following our conversation, I made a beeline to hell, otherwise known as Google.  I feverishly punched in her symptoms.  What I found was, not surprisingly, both horrifying and terrifying.  Her symptoms happened to be the first two on every list for one particularly dreadful and life-destroying condition.  And, as luck would have it, the third most common symptom listed as evidence of this particular disease turned out to be another symptom that my loved one had in fact mentioned experiencing over the last couple years, but which I had also dismissed and assumed would disappear on its own.

Within three hours of our initial conversation, I was disabled with enough information to be utterly consumed with fear.  I had three symptoms to work with now, and three symptoms which were the first three on every list describing the early signs of one particular horrifying fate.  Fear had not only arrived at my front door but had broken the door down and taken me hostage.

The more afraid I became, the more frantically I researched the internet, reading everything available on the condition I had diagnosed, looking for anything that would give me a different list of symptoms or at least a list where her symptoms were further down from the top.  I read about treatments, now and future, trial studies, ways that people self-care once diagnosed, the psychological effects of the disease, how early one should start taking the medication, and what the final stages look like. I read testimonials from people living with the disease, everything I could get my hands on.  By Sunday night I had five Ph.D.’s in this condition.

I was in a state of panic, heartbroken, and truly unable to get okay.  If a moment of serenity appeared, I would remember the shock of what I knew, that this person I love beyond anything, beyond everything, had no future.  I would remember that I could never be happy again.  Each moment I spent with my family member that weekend felt like the last, weighted with melancholy and finality.

I was living a narrative of fear and despair, a narrative I had written in less than 48 hours.  I was sure that the worst thing I could ever imagine happening was happening. I wondered, how was it possible that I had spent my whole life working on getting comfortable with the uncomfortable, okay with the not okay of life, accepting reality as it is, and yet here I was screaming, No, this reality is the one reality that’s not okay!  This reality I cannot bear.  I was in a thought-constructed hell, which felt real, inarguable, and true.

I was the only one who knew that she had all three symptoms.  Other family members knew of one or another, but I was the keeper of the full truth, the only one who knew the whole of it.  When I did finally break and tell another family member, he dismissed my fears as ridiculous, irritating, a case of bad hypochondria. I was to blame for my fear.  His impatience felt like an abandonment of sorts. I felt not only terrified but also deeply alone in my fear.  I couldn’t share my fears with the person whom they were about because I did want to frighten her; I couldn’t speak with anyone else in the family because they were angered by my fear; I couldn’t speak with her doctor about it because I didn’t want to set off further testing and thus speed the road to the eventual diagnosis. I was totally isolated; my thoughts had built a bubble of terror in which I was trapped and alone. 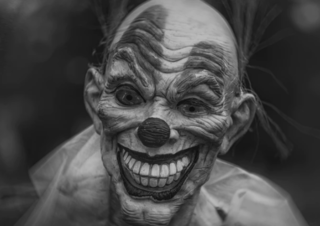 And then something miraculous happened, perhaps because I couldn’t bear another moment of being so afraid, or perhaps just because. Grace appeared and I heard the following: Your mind is inflicting violence on you!  And what followed from there was simply, Stop! Stop! Stop! Something in me stood up for me.  I knew that probability was still on my side and the fear I was living might well be false evidence appearing as real.

As a result of this realization, I was able to halt my mind’s projections into the future, to stop re-inventing and re-experiencing a reality that didn’t and might never exist.  I recognized that I knew nothing other than three facts and didn’t need to go one day or even five minutes into the future. I could decide to live right here, now, and construct no storyline at all.  Discomfort remained, a mild anxiety, but without the narrative connecting the dots, I was remarkably okay. With the sudden awareness of how I was torturing myself, believing my thoughts, I was able to disembark from my mind’s terror train.  I refused to participate in terrifying myself; I chose the freedom and self-compassion that comes with saying, and believing, I simply don’t know. That’s the truth.

For organizing and generating ideas, there’s no match for the human mind.  And simultaneously, for whipping up fear and creating frightening storylines that appear indisputable, there’s also no match for the human mind.  The tragic part is that by creating its narratives of terror, the mind is at some level trying to calm us down, to make sense of and know the unknown, solidify the impermanent.  The mind tries to protect us from the fear of what could happen by creating a certainty of what will happen, which paradoxically can feel less frightening.

In this recent episode, my mind was desperately searching to find proof for its wrongness, evidence that showed its thoughts were mistaken. And yet, the more my imagined storyline was confirmed, the more frantically I searched to find something else to explain the unknown.

Our mind is often the perpetrator of unimaginable violence—on ourselves.  Our thoughts are the great instigator of terror, yelling fire over and over again when a hint of smoke is detected.  At some point, the suffering that we self-inflict can become too much and an act of grace or self-compassion occurs, when we say, Stop, stop torturing me.  Stop creating stories of terror… The truth is I don’t know, that’s all.  Life is challenging enough without adding any of our own terrifying storyline to it.  We can in fact choose to live in the questions, to not know, and not fill in the blanks.  When we leave the dots not-connected and sit with the fear that may or may not exist with what is, we feel a great relief.  Not only a relief from the self-inflicted violence of the terrifying storyline, but also from the need to close up reality and know—everything—even if it’s nothing we want to know.