Do You Feel Alone When You’re Together? How to Deepen Your Connection With Your Partner

A lot of couples show up in my office because they don’t feel deeply connected.  Often, one member of the couple feels like she can’t connect with her partner and is lonely in the relationship.  Couples describe intimate relationships that contain a paltry supply of real intimacy.  In light of this, I wanted to offer something I witnessed recently, which was truly beautiful, and which reminded me of the divine ingredients of connection and how simple (but not easy) it can be to get there.

John is a highly educated man and was vigorously expressing a lengthy and well-defended case against the validity of the whole phenomenon that is the Me too movement.  His argument extended to issues of race and gender as well, specifically, how all of the now-prevalent identity politics is overblown, unnecessary, negative and destructive.

When he did pause, just for a moment, I snuck in an observation, namely, that the identity movement seemed to make him feel defensive and angry.  He denied feeling defensive but shared that as a teacher, the new politic did force him to be hyper-vigilant about the words he uses with students, to have to watch everything he does so as not to be wrongly accused.  I empathized with his experience and how hard it must be to be a teacher these days.  He then went back to his well-constructed case for what was faulty about the movement.

As this conversation was going on, I was also keeping an eye on his partner, Nel.  As John went on with his narrative, Nel’s expression glossed over; she had checked out, lost interest in even trying to stay present.  I understood her experience as there was nobody there, really, for her to be present with.  The possibility for connection was gone, lost behind the steel walls of intellectual content.

But I was hopeful as I had seen an opening; a little piece of John had emerged as he talked about the difficulty for teachers just now.  And so I inquired, hoping that I could get a little further than John’s teacherexperience.

“What does it trigger in you personally, having to be in the thick of it, required to participate in this dialogue and all the forms and training sessions you probably have to be part of?”  And for some reason, with that very simple invitation, within the safety of our relationship, John showed up.  In an instant, his entire facial expression shifted as if he had also not been present and now, suddenly, he was there.

John then expressed how toxic the whole thing felt for him, that he was not interested in any of it and yet was being forced to be in a conversation that was not his life, not valuable to him.  He felt terribly put upon and trapped by the whole environment of identity politics, in a constant fight about issues that he didn’t resonate with, having to prove he wasn’t guilty of something that didn’t in any way belong to him. The specifics of what he felt are less important than what happened in the couple as a result of this fresh truth that John was able to share.

Suddenly Nel was there in the room.  It literally felt like a wave of energy had wafted through the space; it was palpable.  Nel had returned, literally reentered the space behind her eyes.  In that moment, for the first time, I could see real empathy for her husband spread across her brow.   They were sharing the same space, perhaps for the first time in a decade.  Nel was looking at John with an entirely different expression, really looking at John.  Tears welled up in Nel’s eyes; connection was happening.  At last, what had been separating them all these years, all her husband’s ideas, were out of the way and she could feel him, be with him, be truly together, in real company.

John had been honing his ideas and intellect his entire life, using his arguments to validate what he was experiencing, but sadly, because of his own psychology, not even knowing or inquiring into what he was experiencing.  He had gotten quite skilled at proving his rightness, but all his ideas came at the cost of connection.  John didn’t get to feel connected to anyone or, for that matter, allow anyone else to feel connected with him.  He was an island in every way, surrounded by an ocean of mind.

Many people remain stuck in the land of contents—with the context underneath the contents rarely (if ever) reached.  Men particularly seem to get locked in their thoughts, information, and ideas, which shuts them out from their own hearts and shuts everyone else out in the process.  The feeling of being with such individuals is that of not being able to touch them, of being trapped in a corridor with no door, no way to be together, held at bay by the thoughts, opinions, and arguments, the armor that protects their hearts from ever being visible, or vulnerable.

As the partner, you are not able to connect deeply, not below the neck, beyond the layer of intellect. Since it’s not possible to join them in their experience, empathy has to happen from a distance, via an idea of what they’re experiencing but without getting to feel it with them.  For the partner of such individuals, being together is an experience of loneliness, separation, hearts that can’t actually touch, a life that can’t actually be profoundly shared.

When John expressed his personal experience, not his narrative around it, not his justification for it, not all that he knew about it, just his truth in its raw, real, and alive form, simply what he was living on the inside, as it was coming freshly in the moment, Nel felt connected to her husband, like she was at last with him.  They were together in the same now.  His intellectual defenses had stepped out of the way for a brief and blessed moment. Nel could then experience the sensation of being in true company—not being alone together. (She later confirmed this to me in an individual session.)

Couples spend decades trapped, like flies in spider webs, inside the arguments of content, and particularly who’s right, who’s justified in feeling the way they feel about the contents. They get caught, sometimes for good, in the ongoing battle for whose experience is deserving of empathy. This happens for many reasons, one of which is that we mistakenly believe that we are our thoughts and opinions.  Proving our rightness is thus a life and death struggle to ensure survival.  But such is a topic for another day.  In the interests of word count here, it’s my intention to simply point out that ideas and opinions, the stuff of mind, the generalized narrative and intellectual defense system, can serve as a non-navigate-able obstacle to connection. 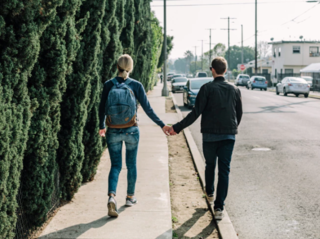 Source: Vladimir Kudinov/ Unsplash
If you’re feeling that you can’t reach your partner, like you’re alone when you’re together, as if you can’t find the key to being truly with each other, notice, is your couple trapped in the land of contents—of mind—with no access to each other’s hearts.  Is your communication stuck in the land of opinions, ideas, and whether what’s happening is right or wrong, good or bad?  Notice if your relationship is waylaid in the purgatory of commentary, the airless box that it is to always be commenting on life to each other, but never in it with each other, forever a step away from your felt experience, and from each other.

If what I describe resonates, consider offering questions to your partner that contain an intention to reach the heart and uncover the real felt experience–not the story of it.  And, offer yourself the same invitation, to deepen your connection with yourself as well.

-What is the experience like, for you, in that situation?

-What does that situation trigger in you?

-What does it feel like when you’re in that situation?

-What’s the worst thing, for you, when you’re in that situation?

What makes it so hard, for you, when you’re in that situation?

And, when describing your own experience, try modeling the communication style you want to receive from your partner.  For example, “For me, when that happens, I feel (such and such)” “What makes it so hard for me is…” Actively model talking about your feelings, your personal experience, rather than your narrative about the situation, maybe even naming that distinction so that your partner can hear the difference, regardless of whether he knows how to do it.  Furthermore, remember that when your partner is able to express his direct and personal experience or a fresh perhaps newly discovered feeling, be sure to offer him (or her) a safe space and supportive response. Don’t correct or dismiss his truth, no matter what it contains.  Each time he moves from the known storyline to the unknown felt experience, he is growing, taking a baby step forward.  When you respond lovingly and with acceptance, you are encouraging more steps in this direction and thus inviting a deeper connection.  True connection happens when we can communicate from our vulnerability, our hearts–not our stories and protective mental layers.  It happens when we dive into life together rather than standing on the shore, safely commenting on it. The most important journey we take in relationship, and life, is from our head to our heart.