Gillian asked her husband to hang the curtains; she had been asking him for weeks. Each time, he had promised to do it, but it didn’t happen. When she asked for the fourth time, he angrily responded, “For Christ’s sake, how many times are you going to ask me? I heard you the first 10 times; it’s on my list. I’m not your puppet.”

Gillian stayed silent, and, even though silence felt terrible, she didn’t know what else to do. She was paralyzed, stuck in a fight-flight-freeze state, frozen. The next day, the curtains were hung; however, her husband’s aggression went unaddressed.

While Gillian got her curtains hung (which she couldn’t do herself because of a bad shoulder), she felt angry and sad. She was also ashamed for allowing herself to be treated that way. She was disappointed in herself for not having the courage to stand up to her husband’s anger.

Olivia needed childcare for her 8-year-old. She had reached out to many babysitters, but none was available. She would normally have watched her son herself, but a friend was in town whom she really wanted to see. When she raised the issue with her husband, he said rather spontaneously that he would take care of it. “Not to worry, I’ll deal with it; if I have to shift things around, I will,” he said.

And so she thanked him and didn’t worry about it.

When the day arrived, it became clear that nothing had been arranged for childcare. Her husband, noticeably angry, then accused her of being selfish, always doing exactly what she wanted to do and expecting him to rearrange his schedule to accommodate her. “Why is the assumption that I will change everything around and you just get to do whatever you want?” he asked.

Being With an Anger Bully

Someone who uses their anger to control and manipulate and as a weapon that keeps you silent and shut down is an anger bully. Anger bullies come in all shapes, sizes, colors, and genders, and when you’re in a relationship with one, and usually you don’t need to Google it to know it—you live in fear, walk on eggshells, and carry an ongoing anxiety that you’ll be the target of the anger at any moment. Sometimes it’s for reasons you know, and sometimes it’s just because of the bully’s mood. Often, you also carry a boatload of resentment for serving as the bully’s punching bag and swallowing his or her anger with none of it being acknowledged.

The consequences of living with an anger bully are numerous and long-lasting. To begin with, you live in a chronic state of anxiety; sometimes it’s at a low level, and other times it’s at code red. But it’s always there, a pit in your stomach, the knowledge that things could erupt.

You become hyper-vigilant to any small change in expression, tone, or movement that might signal the onset of conflict or anger. You learn to scan for danger and monitor your environment to keep yourself safe. Unfortunately, this doesn’t just stop when you’re not with the bully; it becomes a way of being in the world that damages your confidence and sense of well-being and creates nervous system burnout.

Simultaneously, living in a climate of anger can cause you to lose touch with your own truth. You learn to manage, soften, and adjust what you say and do so as to not unleash the bully’s dragon; you become a master at how to behave to keep the peace. As a result, your authenticity is stymied. This, too, doesn’t just disappear when you’re out of harm’s way but becomes part of who and how you are.

One of the hardest parts of being with an anger bully is that you may end up experiencing shame and blame yourself for not having the courage to stand up to the bully—or leave. “I should be willing to confront him or her or leave the relationship. If it keeps happening it’s my fault for not stopping it,” “Do it once…it’s the bully’s fault, twice, it’s my fault,” you may think. Sadly (and mistakenly), you and the bully are now in agreement about you being the one to blame!

The truth is, for most people, anger triggers fear, and is just plain scary and difficult to confront and address. There’s a background fear, too, when in a relationship with an anger bully, that confronting the bully about their behavior will lead to a rupture in the relationship, which presents another threat to your security. No matter how you slice it, how “used to it” you may be, anger is painful, disruptive, and hard to navigate.

How to Help Yourself

So what can you do to help yourself with an anger bully if leaving the relationship isn’t what you want right now? First and foremost, you can stop shaming and blaming yourself for not leaving and not knowing how to live peacefully with it.

While it’s critically important to address anything in a relationship that feels hurtful, unsafe, or disrespectful, and also to set boundaries that protect you emotionally and physically, it’s also important to recognize that relationships are complicated. None of which is to say that you should excuse bad behavior; you absolutely should not.

But we stay in relationships for many reasons, some of which don’t make “sense.” Because someone has anger issues doesn’t mean that you don’t still love them or enjoy being with them, or that you haven’t built a good life together. It doesn’t mean there aren’t—also—many wonderful things about them.

We tend to think in reductionist ways; someone is good or bad. And, if they’re bad, you should leave, and if you don’t there’s something wrong with you: You don’t love or respect yourself; you’re a masochist, you’re giving your power away, and so on. But in real life, human relationships are messy and contradictory, which, once again, in no way is to forgive emotional or any kind of abuse. Abuse is not acceptable in any kind of relationship.

People are many different things all at once and different things at different times. Staying in a relationship with a person who has anger issues isn’t inherently something to feel shame or blame for. You can start helping yourself, first, by telling your inner critic to get off your back about that.

In fact, there are strategies that can help you feel more empowered, in control, and even peaceful in a situation that can feel angering itself, disempowering, unkind, and confusing. Part 2 of this post, soon to come, will lay out some of these methods for self-care—ways to separate yourself from the bully’s anger, set boundaries, and keep yourself unscathed and emotionally well in the face of someone who cannot or will not control their anger. 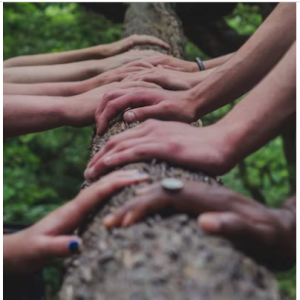